A fire, and musings on the role of fate in a seemingly random coincidence

A couple of days ago, we went camping. Our favourite campsite alongside the Ruamahanga River is fairly remote and unsignposted but popular with locals who know about it[i]. Separated from a paved country road by a grassy stop bank[ii], campers and boaters remain invisible to passing motorists. This particular spot is popular over the Christmas and New Year summer holiday period, and there are often half a dozen or more tents and caravans taking advantage of shady  willows, picturesque river views, excellent boating, water skiing, and water play. 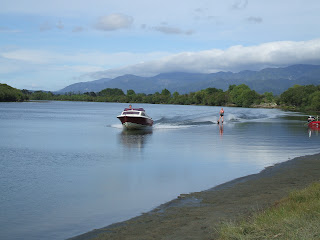 The last few days over Christmas this week have been sunny and hot. The farmer who maintains the land has cut the hay, leaving dry, brown, stubbled grass, both where we camp and alongside the road.

In the sultry heat of mid-afternoon, I headed off on a walk along the stop bank. I had ambled along for some distance, and then dropped down onto the river-side of the bank to investigate an area of trees where high water had flooded around their roots, creating an under-forest-canopy lake—unusual and pretty. When I came back up onto the stop bank and headed back towards the campsite I noticed a thin tendril of smoke rising up from the grass by the roadside. In the couple of moments it took for my brain to register “fire”, the grass caught and flames licked up. “Fire!” I shouted, as I ran towards two women I saw standing on the stop bank closer to the camping area. They turned towards me, saw the smoke, and began to run back to camp as well.

I arrived back to our tent-site along the river breathless and gasped out, “Grass fire” and fast as anything we loaded our two big jugs of drinking water into the back of my car, and I ran down to the river to wet a couple of towels and the sheet I’d used to protect the backseat of my car from dog hair, and then I jumped into the car and headed back to the fire. By the time I got back to the fire, just a couple of minutes, the fire had spread from a few tentative flames to an area covering several square meters. Other campers were running with buckets of water hauled from the river. We poured on water and beat out the flames until all that was left was a good-sized patch of blackened, smouldering earth. We also found the tossed cigarette butt of the passing motorist who undoubtedly was the culprit.

Later, back at camp, the “what ifs” set in. What if I had not gone for that walk at that particular moment? What if I hadn’t seen that tendril of smoke and raised the alarm? In just a few minutes we could have had a serious, perhaps life-threatening fire on our hands—the grass was very dry and the fire spread fast. The roadside (and spot where the fire started) was invisible from the camp area, and the fire was right by the gate through the fence that was the only entrance/exit point for the camp area. We could have been trapped there with no place to go but into the river, abandoning camps and cars.

Like so many of these things, we’ll never know if it was just a coincidence that I decided to go for a walk at that particular time, or go in that particular direction, or be there right when the first flames caught. We’ll never know if the fates decreed that the person driving by with the cigarette butt would toss it at exactly a place and time where and when someone would see the start of the fire and there would be enough people in the vicinity to put it out. This country road out in the Waiarapa is pretty isolated, and there might only be ten cars in an hour go by, maybe fewer.

What hand does fate play in an incident like this? I felt no foreboding compulsion to randomly “go for a walk,” and it was the hottest part of the afternoon, so why did I do that just then?  A rationalist would chalk it all up to mere coincidence, but I dunno. And if there was an element of divine manipulation here—and I open-mindedly wouldn’t discount it—then how far ahead did that manipulation begin? Before I went for a walk? Before the smoker lit his/her cigarette? Before I went camping? Or is it all just one of those random coincidences? I dunno, but it’s funny stuff to think about...


[i] In New Zealand, camping in officially undesignated areas is known as “free camping” or “freedom camping”. The practice has a long tradition in New Zealand, but is increasingly discouraged as, without facilities, such camping can degrade the environment when people leave behind their rubbish and waste materials. Always, please, if free camping, leave the area at least as pristine as you found it and pack out all waste materials!
[ii] In much of American they call this a levee.
Posted by Susan Thrasher at 14:16

Email ThisBlogThis!Share to TwitterShare to FacebookShare to Pinterest
Labels: fate