“All around us we see the bridges of life collapsing, those capillaries which create all organic life. This dreadful disintegration has been caused by the mindless and mechanical work of man, who has wretched the living soul from the Earth’s blood.”
--Vickor Schauberger

It bothers me that New Zealand’s Department of Conservation (DOC) and the Greater Wellington Regional Council (GWRC) seem so hell-bent on eradicating—by whatever means--some 300 or so plants that they have identified as “noxious weeds” from wild and semi-wild areas. Cutting, rooting out, spraying with herbicides and ring-barking are all recommended methods. The majority of these plants they define as “weeds” have simply expanded beyond people’s gardens into wilder areas. (See the weedbusting booklet put out by the GWRC,  DOC's list of invasive weeds, and common weeds in New Zealand.)

For some of us, the border between “tended garden” and “wilder areas” is fuzzy. I recently moved to a quarter-acre hillside section that backs onto a gorgeous tract of native bush. My neighbours’ properties do the same. At one point not long ago, but before we moved in, a sizeable area out back—on our property and adjacent properties—was covered in pines, and these had been cut down and harvested for firewood maybe a year or two ago. Now that area is a steep and sunny—and potentially unstable—slope.  I’ve been watching with some delight over the summer as new plants of many varieties have sprung up to colonize the area, creating a new and interesting ecosystem.  I know as well that the roots of each plant help to stabilize a steep landscape. It has been fun seeing what naturally appears, how Mother Nature heals the scar and regenerates life. I’ve planted a couple of trees as well, on our side of the property line.

Many of the plants that have come up clearly fall under DOC’s and WRC’s list of “noxious weeds”: blue and white morning glory, cathedral bells, blackberries, banana passionfruit, arum lilies, broom, foxglove, clematis, agapanthas, a variety of grasses, thistles. The latest “infestation” is a 5-foot-high “sea” of weedy/flowery “things”—I have no idea what they are—that the bees  love.

A couple of weeks ago, two fluorescent-clad fellows appeared on my doorstep asking if they could use our property to access this regenerating area as part of their annual weed-control program.  I don’t remember now if they were from DOC or WRC. I confessed to not being all that happy about seeing the new plants destroyed as they help stabilize the slope and create an emerging ecosystem. Plus, I garden without chemicals, and I didn’t want to see the back of my lot sprayed with herbicide. So I declined to give them access.

A few days ago, I spotted the two fluorescent-coated men again, this time coming down the slope from a neighbour’s property up the hill. They’d hacked through the brambles and vines with cutters and saws, and sprayed great swathes of greenery, although they did not come down onto our property. The wind was blowing from that direction, and I overheard one chap remark to the other about the number of bees the area was supporting, and I thought—but can’t be sure—he was questioning the sense of spraying flowering plants that were being tended by the bees. I didn’t hear the response; they carried on with their task. Now, a few days later, I look out the bedroom window at a hillside that used to be verdant green and covered in flowers, and I see big brown patches of dead vegetation in the sunny, open area of the slope, and the trees along the verges are covered in hanging clumps of dying, browning vines.

It makes me both angry and sad to see Mother Nature’s attempt to heal a slash in the landscape thwarted by the poison and cutters of so-called "conservationists".  I recognize that in New Zealand, the word “conservation” seems to refer to wanting to create some imaginary, unchanging, unchallenged pre-European utopian landscape. Those who work in “conservation” here are really more operating as “gardeners”—picking and choosing, pruning and poisoning to create what they deem is “best” for our naturally wild and wildish spaces.  Any plant that is an "import" to these isolated islands is suspect, and creepy, crawly, sprawly, viney plants seem to be particularly demonized. I am sure their intentions are good, but I think these "conservationists" are playing God in a most foul way. I trust Mother Nature knows what she's doing, and knows how to heal the land when it has been altered. She could glory in the diversity we have brought into her playground. Why do we insist on making it so hard for her?

See my previous post on this topic Conservation: What’s in a Word?
Posted by Susan Thrasher at 20:35 No comments:

Email ThisBlogThis!Share to TwitterShare to FacebookShare to Pinterest
Labels: ecology

Fluoride in Your Water?

The issue of water fluoridation comes up from time to time, and I’ve been figuring for a while that I should know more about this issue, so I did a little digging. Here’s what I’ve found:

In New Zealand, a little over 60% of our country’s drinking water has fluoride added to it[i]. Here in the Wellington Region where I live, only Petone and the suburb of Korokoro have fluoride-free water.  According to the Greater Wellington Regional Council, fluoride is added to the rest of the region’s drinking water to bring it up to a level between 0.7 and 1.0 parts per million (ppm), at a cost of $195,000 annually[ii]. The 0.7-1.0 ppm figure is based on the Ministry of Health’s recommendation,[iii] a level they consider optimum for dental health. In the U.S., the recommended level is 0.7 ppm[iv].

Fluoride is an industrial chemical. The most common form to be added to drinking water is Fluorosilicic acid[v], a liquid by-product of the fertilizer industry. In Wellington they use sodium fluorosilicate[vi] which, being a powder, is easier to ship. Fluoride occurs naturally in some water supplies, especially in volcanic and hydrothermal areas[vii].

Fluoride was first added to a municipal water supply in 1945 when Grand Rapids, Michigan (USA) became the first city in the world to have artificially fluoridated water. This followed an earlier dental discovery that teeth discoloured by unusually high natural levels of fluoride in some local water sources were also unusually resistant to decay. Further research suggested that if fluoride was added to pure water, and levels were maximized at around 1.0 ppm, the tooth staining (flurosis) caused by the fluoride would be minimal and white (rather than brown), and teeth might be more decay-resistant[viii]. By 1960, many cities in the U.S. had introduced fluoridated water. 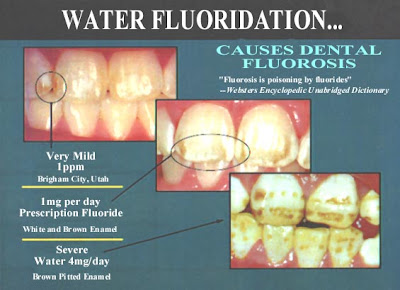 Other than its [assumed] advantage for dental health—more on that shortly—fluoride is not advocated for any other health benefit. In fact, concern has been raised in recent years about the health RISKS of excess fluoride consumption. The US EPA (Environmental Protection Agency) sets a maximum safety level of 4 ppm[ix], which is twice what their senior scientist recommended (see the documentary Fluoridegate). The World Health Organisation (WHO) recommends a maximum of 1.5 ppm[x].

Excessive consumption—and it is cumulative in the body over time—can lead to an increased likelihood of bone fractures and bone pain, and in children can caused pitted teeth and cosmetic tooth damage[xi]. Although there have been attempts to establish whether or not drinking fluoridated water increases the risk of cancer, examination of population records has proven inconclusive. Rats, however, showed increased risk of bone and liver cancers when given only fluoridated water to drink (see Fluoridegate). Fluoride, when combined with aluminium, may be a risk factor in the development of Alzheimer's (see here); aluminium is sometimes added to drinking water at the same time as fluoride, or can leech out of cookware. And in a recent meta analysis of several studies, fluoride exposure was linked to lowered intelligence levels in children[xii].

One concern is that we get fluoride from other sources besides our tap water, and we cannot  as individuals easily monitor the amount of fluoride we are consuming. Most of us brush with fluoride toothpaste, and if you read the back of the toothpaste tube it will say in bold print something like: Do not swallow. Rinse well after brushing. Fluoride is, after all, poisonous. But how much lingers and gets swallowed with your saliva? Many mouthwashes also have fluoride. So do many soft drinks, sports drinks, wines, and juices. Tea leaves concentrate any fluoride that was in the soil, and if you make tea with fluoridated water you’re getting a double dose. Some pesticides that may have been used while your food was growing contain fluoride. Some drugs are fluorinated. If your water is fluoridated, and you drink more of it in the summer when it’s hot, you’re getting more fluoride than you might do if the weather is cooler and you drink less. So it’s hard to measure. One caution: if you are using infant formula, be sure to NOT use fluoridated tap water to mix baby’s formula as the amount of fluoride your baby is likely to consume will exceed safe levels[xiii].

Lastly, I’d like to come back to the central issue: does fluoridated water actually decrease tooth decay? If it does, then countries with a high percentage of water fluoridation should have lower levels of tooth decay than countries that don't put fluoride in their water. Yet of the top seven countries[xiv] with the lowest tooth decay rates, only England fluoridates some of its water (around 11%) according to the WHO. Meanwhile, New Zealand is one of just 11 countries worldwide where over half the population drinks fluoridated water. The other “50%+ fluoridated” countries are the U.S., Australia, Chile, Brunei, Guyana, Hong Kong, Malaysia, Singapore, Israel, and Ireland[xv]. In Europe, where tooth decay rates are low, only 3% of the population drink fluoridated water[xvii].  Surprisingly, the WHO has recorded a general drop in decay levels over time in all countries completely irrespective of water fluoridation. 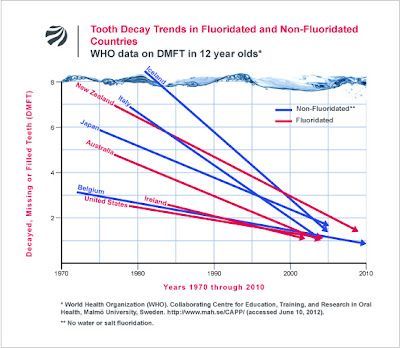 Which begs the question...if fluoride is a toxic chemical, and fluoridation doesn’t make any difference to rates of tooth decay, but it does cause dental fluorosis; it may increase the risk of developing bone damage, cancer, and Alzheimer's; it appears to impair children’s intelligence; AND it costs the taxpayers money to add it to our water...why in the world are we letting this stuff be put in our water supply?