Back in April I wrote a post about the upcoming aerial 1080[i] poison drop in Rimutaka Forest Park[ii] bordering Lower Hutt and Wainuiomata, Upper Hutt, and Featherston, and including over one of Wellington’s primary watersheds. That has been a popular post, and I thought it might be useful to do an update. 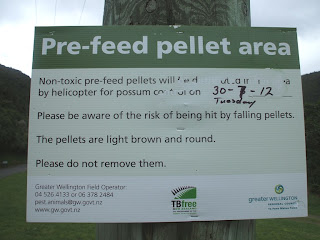 As of three days ago (13 August) the Gum Loops Walk near Wainuiomata and the watershed area profiled in my previous post had still not been poisoned, but signs indicated they had been aerial dropping non-poison bait pellets, presumably to accustom wildlife to being safely fed in this way. When I walked the track on Monday I found it cold and wet—we’ve had quite a bit of rain lately—and I encountered two other walkers, both with dogs. I also watched two chaffinches pecking at a bit of something they’d found to eat on the tarmac road leading up to the watershed area, and I wondered if they’d enjoyed the winter windfall feed from the recent drop of non-poisoned pellets.

Since my previous post on this topic, publication of articles in the DomPost and Hutt News in which I was quoted (and misquoted, and had statements attributed to me that I didn't say at all, but that's the press for you) as been concerned about the upcoming 1080 drop, there have been numerous DomPost letters to the editor on 1080, both for and against its use, and several large ads extolling the virtues of using 1080 sponsored by the Animal Health Board, the Department of Conservation, and Wellington Regional Council. This is clearly a polarizing issue.

The Graf Boys, keen hunters and lovers of the wilderness, have recently put this video on you tube showing deer after deer found dead, poisoned and bleeding and twisted in agony, following an aerial 1080 poison drop near Taihape earlier this month. They found more dead deer than possums in this forest block, although possums were ostensibly the target.

Also from the Graf Boys blogsite, you'll find much to ponder in a report (testimony) on the use and implications of 1080 in New Zealand by Quinn E Whiting-Okeefe, and a beautiful and impassioned plea in poetry  from Redwood Reider to Dr Jan Wright, our Parliamentary Commissioner for the Environment to stop dropping the stuff in our forests, filmed on the stage at Te Papa (our national museum here in Wellington). (Note--Blogger and/or YouTube aren't allowing me to upload it directly, so you'll have to click on this link to watch. Reider is a bit hesitant to get going, but once she hits her stride, this is performance poetry at its best.)

[i] For a brief description of what 1080 is, see my previous post. For more detailed information on this poison and its effects, I recommend http://www.1080science.co.nz/index.html. The Department of Conservation defend their use of 1080 on their website http://www.doc.govt.nz/conservation/threats-and-impacts/animal-pests/methods-of-control/1080-poison-for-pest-control/
[ii] For some lovely photos and information about Rimutaka Forest Park see: http://www.rimutakatrust.org.nz/index.html
Posted by Susan Thrasher at 17:08 4 comments:

There was an article in the local paper the other day (Dominion Post 20/7/12, find it here), criticising the Whanganui District Health Board for deciding to trial a number of “natural therapies” at the local hospital as optional compliments to patients’ usual health care. These therapies include prayer, meditation, massage, and Reiki, and are being offered by local alternative health therapists to patients for free.

I personally think all of these are useful as complimentary health therapies and applaud their introduction, so I find it surprising that this enrichment of hospital health care would be contentious.  Yet Victoria University professor Shaun Holt is critical, particularly of Reiki and prayer, stating there is no evidence-based research on their effectiveness. Whanganui District Health Board Member Michael Laws goes a step further calling the decision to trial these therapies in hospital “seriously stupid” and suggesting they are—and like Holt he singles out Reiki in particular—akin to witchcraft.

Contrary to the views expressed by Holt and Laws, Whanganui Hospital is simply keeping up with modern medical practice by introducing a repertoire of complimentary therapies for their patients. According to the American Medical Association, around 42% of U.S. hospitals offer a range of complimentary therapies including massage, meditation, acupuncture, and Reiki, and two thirds offer at least massage[i]. In one Cleveland study, half of their patients (over 1700) opted to receive counselling, spiritual care, touch therapy and/or music or art therapy during their hospital stay, and 93% of the patients who chose to do so reported their therapy “useful”[ii].

Regarding Reiki (what Holt and Laws imply is “akin to witchcraft”), many prestigious institutions including the University College of London hospitals and Southampton University hospitals in the UK; the Cleveland Clinic, Massachusetts General Hospital, Harvard Cancer Centre (the largest cancer research centre in the world) and John Hopkins Hospital in the U.S.; and the CGG Clinic in Germany offer Reiki as a complimentary therapy[iii], especially for cancer patients. In parts of the U.S., learning Reiki is part of standard nurse training. Some countries include Reiki treatments in health insurance coverage. I’ve used this article as a starter for an article on Reiki on my mindwork website, so if you are interested in finding out what Reiki is, where it comes from, and how it is used, click here.[iv]

Prayer and attendance to patients’ spiritual needs is also common elsewhere. In the US, about 85% of hospitals employ chaplains.[v]  Their role in palliative care—and I can speak from personal experience here—is valuable not only for patients but also for their families, if only in offering comfort and support at a difficult time. Studies have shown that hospital based “spiritual intervention” for the chronically ill significantly increases patient well-being and is valuable for patients during the recovery process[vi].

Meditation is a real wellness powerhouse which can lower stress levels, ease pain, lower blood pressure, increase the body’s immune response, and increase a person’s ability to focus and concentrate. Many US hospitals and clinics now teach patients to meditate[vii]. If you want to know more about meditation, check out my mindwork website page on it here.

Massage, the most common alternative therapy to be found in hospitals, is useful for pain control, stress relief, reducing muscle tension, increasing blood flow, and increasing the range of motion after injury or during convalescence. Besides, it just feels good!

It seems to me that if these therapies are being offered for free, and patients are free to take advantage of them or not as they wish, and they do not impact on whatever “official” medical treatment the patient is receiving, then Whanganui should be rejoicing at the enrichment of their hospital treatment for patients. No one expects these treatments to replace modern allopathic medicine, yet as Andrew Schafer, chief physician at the Cornell Medical Centre in New York observes, “Today’s complimentary and alternative therapies could be tomorrow’s medical breakthroughs.”[viii]

Can You Trust Your Drugs?

It’s not uncommon to hear of a food item recall—a bit of glass or metal is found in your jar of instant coffee and supermarket shelves are cleared of that “batch”[i]. Everything from eggs[ii] to pet food[iii] is “recalled” when salmonella contamination is detected. Chinese parents are still reluctant to buy Chinese-made baby formula after the 2008 melamine-in-dairy foods scandal[iv]. Yet when it comes to the drugs we take, self-monitoring by producers and overseeing bodies such as the US FDA seems to be disturbingly lax.

Although 60 Minutes apparently ran this story a year ago in the U.S., I just came across it the other day on the net. Drug manufacturer Glaxo-Smith Kline had serious breaches of protocol in a major manufacturing plant in Puerto Rico. Without insider Cheryl Ekhart’s brave whistleblowing, the plant could still be putting out adulterated and mislabelled drugs, including medications like diabetes drug Avandia, antidepressant Paxil (paroxetine), and non-prescription antacid medication Tagament being put in each other’s bottles, with each other’s labels, and with dosages mislabelled. In one case, an 8-year-old boy prescribed 10mg of Paxil was actually getting 25mg Paxil CR. Watch the story here.


Glaxo pleaded guilty to fraud charges and settled out of court with a $750 million dollar fine. Sadly, this sort of practice is “business as usual” for pharmaceutical companies, and Glaxo is one of the worst. This year (2012) they agreed to pay a record-breaking US$3 billion in fraud settlements[v] for promoting off-label use[vi] of their drugs (such as Paxil for children!) and failing to report detrimental safety data on their drugs. Abbott Laboratories settled for $1.6 billion (misleading marketing of anti-seizure med Depakote), and Johnson & Johnson may be fined up to $2 billion over off-label marketing of their antipsychotic Risperdalv.

The fines keep going up, but drug sale profits more than compensate for the fines. In a 2009 article by David Evans[vii], he reported that the total of US$2.75 billion paid by drug giant Pfizer in fines up to that point accounted for just a little over 1% of the company’s $245 billion revenue generated between 2004 and 2008.

Pharmaceutical companies are big businesses. Although improving your health is their stated goal, keep in mind that if you are healthy, you are no longer their customer. Ultimately, a pharmaceutical company's primary loyalty is not to you the consumer, but to shareholders who want the company to generate good returns for their investment.  To make top profits, drug companies have to sell as much product as they can for the highest possible price to as many people as possible. In the business world, that's good business.

Can you trust your drugs? I dunno. It seems to me that if a company wants to be a trusted name, they have to produce a pure and reliable product. But if the 60 Minutes story is any indication, it sounds like Glaxo, at least, is more interested in keeping problems quiet than alerting the public and fixing problems when they occur. So just as important as whether you can trust your drug, can you trust your drug company?

[i] http://www.telegraph.co.uk/news/uknews/8368454/Factbox-recent-food-scares-and-product-recalls.html
[ii] http://news.discovery.com/human/egg-recall-salmonella.html
[iii] http://www.foodsafetynews.com/2012/05/after-eight-expansions-how-big-is-the-diamond-pet-foods-recall/#.UCGRvvbib8k
[iv] http://topics.nytimes.com/top/reference/timestopics/subjects/m/melamine/index.html
[v] http://www.nytimes.com/2012/07/03/business/glaxosmithkline-agrees-to-pay-3-billion-in-fraud-settlement.html?pagewanted=all
[vi] “Off label” means it hasn’t been approved for us for that particular condition or age group. Doctors can prescribe drugs off-label, and it is presumed that they will tell their patients they are doing so. However, many doctors often rely on information from pharmaceutical manufacturers regarding the suitability of particular drugs for their patients, and if marketing promotion does not indicate that a particular use has not been approved, doctors may  not realize it’s an “off label” treatment.
[vii] http://www.bloomberg.com/apps/news?pid=newsarchive&sid=a4yV1nYxCGoA
Posted by Susan Thrasher at 16:48 No comments: