The Dirty Face of Dairy

The dairy industry has been in the spotlight in New Zealand over the past few days following the broadcast on TV One’s Sunday program that showed shocking footage of calf abuse at the hands of farmers, truckers, and abattoir workers. Obtained under cover by animal rights group SAFE, the footage shows newly born calves being separated from their mothers; held in roadside holding pens for hours without shelter, food, or water; being manhandled (thrown in many cases) onto trucks; and then thrown, beaten, and bashed in abattoir stock pens. (WARNING: these clips are disturbing.)

The revelations have understandably caused a public outcry, and outcry from many farmers too, who claim to run caring and humane dairy farms. While New Zealand’s biggest dairy company Fonterra insists animal welfare is a priority for them, and the Minister for Primary Industries Nathan Guy says they have commenced an investigation (albeit, two months after they were given the footage and not, apparently, before it became public), the issue brings some home truths to the New Zealand public.

While this kind of animal abuse is profoundly disturbing and probably not the norm on dairy farms in general (although it may be at many abattoirs), there are numerous issues raised by the dairy industry that are less obvious. The basic truth is:  to create the milk in our fridges, our ice cream, yogurt, and toasted cheese sandwiches, cows must be impregnated yearly and their calves must be removed from them (almost always within the first 24 hours) so that we can harvest the milk that nature intended for the calves. Many of those calves are superfluous to requirements, being either male or of a breed not suitable for meat production such as Jersey, and thus they are killed when just a few days old. We call them bobby calves (regardless of sex). Most go into the pet food industry.

Dairying is hard on cows too. Heifers (female cows that haven’t yet had a calf) can be bred 9-12 months after they are born. Dairy cows will have several annual calves, and when their milk production drops after a few years because they are worn out, they are sold off to the meat works. Milking normally occurs once or twice a day, not more often as it would be with a calf at heel. Mastitis is common. Modern pasturage rarely allows cows to pick and choose what plants they want to eat. And as for the issue of calf removal, it is well known that cows and calves both find this process stressful even if done “kindly”, and some cows mourn the loss of their baby for days after the separation—a cow’s maternal instinct is huge. (And they’re smarter than we often give them credit for—see this story of a protective motherly cow who hid her calf--spoiler: happy ending.)

Most of the public is so far removed from the farm gate that, other than knowing that milk comes from cows, little thought or awareness is given to the actual process. I have a cousin in the US who told me once that she’d never eat lamb or veal because she doesn’t want to eat baby animals. She has no hesitation, however, in dowsing her strawberries with cream or pouring milk over her corn flakes, oblivious to the distress caused to both cow and calf by the dairy industry. Another example: a friend, upon hearing about the current NZ dairy exposé, said that she considers herself an intelligent, well-educated woman living in a dairy-exporting country and yet she’d never really realized that cows have to get pregnant and have a calf every year to provide our milk.

Dairying in New Zealand picks up a pretty bad environmental rap too. Run-off from dairy contaminates land and waterways, and there are no easy answers to this issue unless cow numbers are reduced, and that’s not good for profits—money remains the trump driver here, as it does in all industries. This article seems to advocate the popular American concept of housed cows rather than pasture-feeding as a possible solution for New Zealand. Ultimately dairy, along with other livestock production, is environmentally unsustainable as a growth industry in the long term. I really have to do a plug here for the excellent documentary “Cowspiracy” which certainly affected my way of thinking when I watched it a month or two ago.

There is also a growing contingent of health professionals who are questioning the health value of including dairy in our diet. If you do want to continue consuming dairy products, organic seems to be the way to go—not necessarily less cruel, but almost certainly healthier.

Lastly, if a growing awareness of the cruelty and/or environmental issues generated by the dairy industry bothers you, or you are concerned that you’re consuming more dairy products than are good for you, there are alternatives. While I’m not ready to go totally dairy free myself, I’ve found it easy to cut back on dairy consumption. Milk is easy to replace, as is ice cream. Cheese is a little harder, as is yogurt, and margarine is no way a healthy substitute for butter (but try coconut oil or olive oil for cooking). If going cold turkey on dairy won’t work for you, try cutting down. Try rice milk or almond milk or coconut milk on your cereal and in your smoothee. 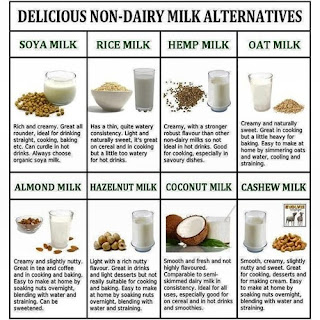 Dairying is an industry. The cow has become a production unit. Her calf is a by-product. We as consumers don’t have to support this framework and ideology. Just because we’ve [seemingly] always done it this way doesn’t mean we need to continue to do so. Think, before you drink, and let your choices be conscious ones.
Posted by Susan Thrasher at 15:00 1 comment: