I think it sounds like an absurd proposition, but Federated Farmers (FF) and New Zealand’s conservation group Forest and Bird (F&B) announced this week—in all seriousness—their intended goal of creating a  New Zealand free of predators (see here). This extraordinary initiative, first sounded by the Predator Free NZ Trust in 2013, is achievable, they claim, by completely eliminating all of the rats, stoats, ferrets, possums, and feral cats in the country. It certainly is an ambitious goal. Can it be done? And more importantly, SHOULD it be done? 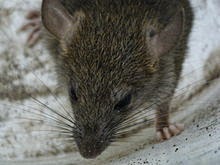 New Zealand evolved without predatory mammals, and the first rats presumably didn’t arrive until the first Polynesian settlers did sometime in the 13th century (although radiocarbon dating of rat bones and paleontological examination of chewed seed hint they could have been here earlier, see here). European settlers brought a variety of familiar animals with them, and imported brushtailed possums from Australia to build a fur trade. Escapees soon inhabited New Zealand’s forests.

Today, the rats and stoats and possums and ferrets and wild domestic cats are all on the blacklist. While many farmers want to control bovine TB (rare in New Zealand, but not eradicated, and possums are carriers), conservationists argue that native birds-- 37 native New Zealand birds are classified as “threatened”—are at risk as long as predators roam the forests.

While pest trapping occurs in some areas, the various conservation departments and farming organisations tend to favour poisons for their pest control. The aerial use of highly-toxic 1080 is the most controversial of the poisons used, especially given the aerial method of application. New Zealand uses about 85% of the world’s supply of 1080, and rather than import it from the US, the West Coast Regional Council has invested in a 1080-manufacturing plant in Rolleston, an “innovative business decision”. This year (2014) has seen the most comprehensive coverage of New Zealand native forest with aerial drops of 1080 (see here) under a Department of Conservation campaign titled “Battle for Our Birds”, based on the argument that beech tree masting in 2014 will result in so much food that the forests will be over-run with rats, and when the seed runs out they'll turn to birds for food. (The fact that beech trees mast on a regular basis and this hasn't happened before appears irrelevant--but that's off the topic.)

Besides the absurdity of thinking all of the predatory animals in New Zealand can be eradicated, and the ridiculous amount of poison that would have to be dumped on the country to do that (presumably without endangering humans, pets, and livestock), there is a very real question here about the ecological value and benefit of removing predators from the environment. Indeed, the removal of predators from an ecological system almost always has detrimental effects.

Elsewhere in the world, ecologists are increasingly becoming aware of the important role predators play in maintaining a stable ecosystem and encouraging biodiversity. Whether talking about large predators such as wolves and lions or small predators such as sea stars or codfish or armadillos or spiders, the trophic cascade that develops when predators in the ecological system are removed has profound implications for the health of the other residents in that system, often putting the most vulnerable creatures—those most in need of protection—at even greater risk. (See Caroline Fraser’s The Crucial Role of Predators.)

There’s a great little you tube video that shows what happened when wolves were reintroduced into Yellowstone National Park in the US. The impact on, and enhancement of, the entire ecosystem was profound and surprising. The removal of such animals would undoubtedly have the reverse effect.

While rats and stoats may not be wolves, and conservationists might argue that New Zealand wildlife developed without mammalian predators and has no need for them, the fact remains that their removal would undoubtedly have profound and unexpected implications for our wild spaces now.

New Zealand is a unique island nation, but it is no longer isolated. Man has come here, with his cows and his sheep, his horses, and deer, and dogs, and cats. Early Maori exterminated the moa, large flightless birds that once browsed the forests, and used fire to turn thick forests into more amenable grasslands. Modern man has brought his crops of corn and wheat and ryegrass, his aeroplanes, his herbicides, and his pesticides to these island, and he has now decided that the wilds must not be allowed to develop naturally under the auspices of Mother Nature (who no doubt delights in having a good variety of plants and animals to play with), but that even the wild lands must be managed, just like any good farm.

Posted by Susan Thrasher at 18:13 No comments:

Poisoned Possums in the Hutt River

I feel like I’ve written more than enough blog posts about 1080, a shorthand term for the toxic chemical sodium fluoroacetate, that is routinely and deliberately spread by aerial means across large expanses of New Zealand forests, ostensibly to “manage biodiversity” by killing pests, most specifically possums, rats, and stoats. Yet I am compelled to write yet another post. 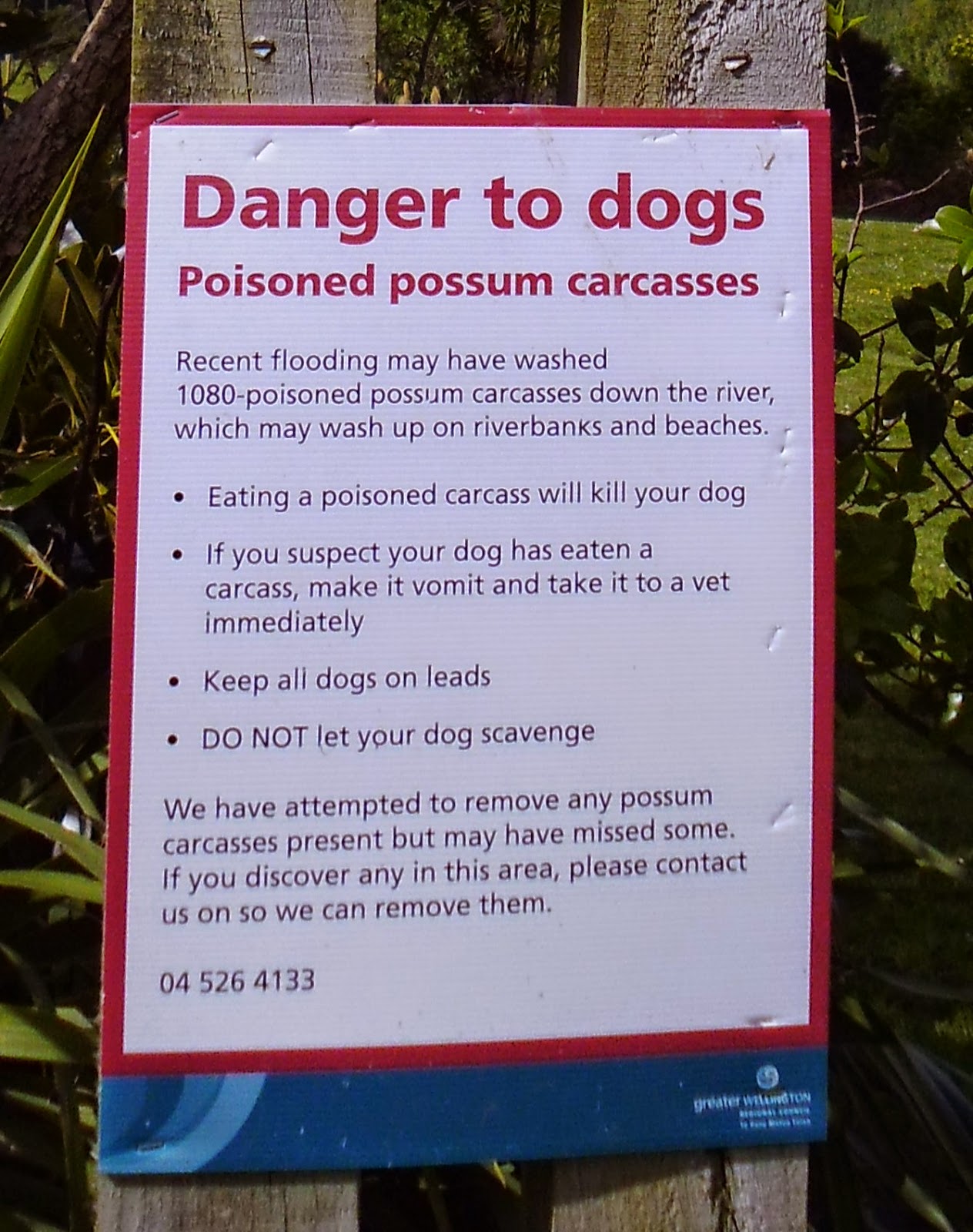 Signs have just gone up (it’s the beginning of November 2014, but I think they appeared just in time for Halloween—a grisly “treat”) along the Hutt River that runs through my community of Lower Hutt and discharges into Wellington Harbour. They warn dog owners to keep pets on leashes to avoid contact with poisoned carcasses that may be washed down the river following rain as a result of an aerial drop of 1080 poison upstream. Dogs are particularly susceptible to 1080 poison, so any canine that might happen to find and chew on a dead possum is at serious risk of death. There is no antidote.

While posted warnings for dog owners are prudent, I’m bothered by the fact that the Greater Wellington Regional Council has been so quiet about this 2014 drop over Kaitoke Regional Park and the Hutt River catchment area (some 10,000 hectares—25,000 acres—at a rate of 1.5 kg of bait per hectare) that I didn’t even realize was happening until it was all over, and I reckon most other folks didn’t know about it either. Indeed, it took a little bit of detective work on line to find this PDF file put out by the Greater Wellington Regional Council, and the fact the poisoning in this area began 30 September (see here).

The Hutt River catchment supplies about half of the public water for Wellington and the Hutt Valley. The above PDF file offers the rather limited assurance that public water will not be taken from the Hutt Valley catchment during the poison drop nor immediately after it. Presumably by the time the carcasses of dead animals might be washed far enough down the river to poison dogs, it will be okay for us to drink the water from this catchment again.

Hunters are also warned not to take game (deer, pig) from the drop area or within several kilometres of the drop area for at least four months. They haven’t mentioned trout from the Hutt River, popular with anglers, but elsewhere in the country, anglers have been warned to not eat trout caught in water contaminated by 1080 or 1080-poisoned carcasses. Presumably the same goes for eels.

The beautiful Hutt River not only supplies our drinking water, it is a beautiful river running through the heart of a major suburban area. Families, kids, dogs, and anglers love the river as a place to play, picnic, swim, and fish. The water from this river runs through our taps. Assurances that they won’t use this water “during or immediately after the 1080 drop” isn’t very reassuring when anecdotal reports suggest 1080 baits can lay around for weeks after a drop.

Water quality in New Zealand is a hot political issue. With 60% of our monitored rivers deemed too polluted to swim in, let alone drink, and 2/3 of our freshwater fish at risk (see here), it seems daft that adding more toxin to the mix is not only done deliberately, but done without free public debate.

I think it’s sad that Hutt River users this spring need to be wary of poisoned carcasses washed downstream by the rains. I think it is worrisome that our public drinking water is potentially compromised. I think it’s concerning that this all happens seemingly on the quiet. And I think it is seriously time for out-in-the-open public debate about these issues.
Posted by Susan Thrasher at 15:41 1 comment: