What's Wrong With Our Daily Bread? 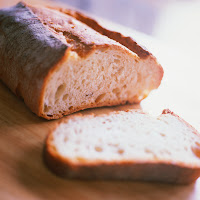 When I was a child, my mother used to bake bread. I can remember coming home from school and opening the front door to be met with the glorious smell of freshly baked bread still warm from the oven—it would nearly make me swoon with delight and desire. Spread generously with a golden smear of butter and topped with a spoonful of homemade raspberry jam, it was about as close to heaven as it was possible to get on this earth.

Alas, such culinary ambrosia is no longer the stuff of what dreams are made. Indeed, nothing here gets the healthy heart tick. First to fall was butter. Saturated fat, they told us, would clog our arteries and harm our hearts. Margarine was promoted as a healthier alternative, although the presence of trans fat soon made that suspect. Now, only olive oil gets the healthy heart nod. And it’s true that warm, fresh bread dipped into virgin olive oil is rather nice, but it’s not the same food as bread with butter and homemade jam at all.

Homegrown raspberries aside, the jam is suspect too. Sugar has been considered unhealthy for years, touted as “empty calories” that give the body energy, but with no nutritional value and causing tooth decay to boot. Recent research, however, suggests that sugar may be an even greater villain than fat. Sugar, it seems, is metabolized in the liver which converts much of the energy to fat, causing insulin resistance and leading to obesity, heart disease, diabetes, and probably some types of cancers. Gary Taubes summaries the current take on sugar in this excellent NewYork Times article.

But the bread. Ah, the bread. The other day I posted a comment on Tim Brownson’s blog post about Lissa Rawson’s new book Mind over Medicine. My comment prompted an exchange of comments between Tim and another of his readers about the merits and demerits of doing a gluten fast and the paleo (hunter-gatherer) diet which got me thinking about this bread thing.

It seems like lots of folks these days are showing intolerance to gluten, and it may be that this is, in part, simply fashionable—after all, gluten-free products are everywhere these days. But I think there’s something more going on here. I’m not into anti-gluten stuff. I grew up loving bread and pasta, and never had a problem with it until the last few years. Now, I notice if I eat bread (in particular), I end up with stuffy sinuses for a few days. A lot of other folks I’ve talked to don’t eat bread much at all any more either, and say it upsets their stomachs, or causes rashes, or makes them feel unwell.

I’ve tried sticking to the more expensive whole meal seedy sorts of breads (in New Zealand, Vogels or Bürgen or Two Hands seeded) and even tried organic (Purebread) and can get away with a couple of pieces of toast occasionally without significant effect, but it’s been a while since I’ve bought a loaf of sourdough or ciabatta—which I used to love—and allowed myself to simply pig out, because I pay for it afterwards with a stuffy nose that can last for several days.

Ten or so years ago, I had a bread machine and I used it often, and then I seemed to notice over time that the bread wasn’t coming out like it used to. I finally stopped using the machine and went to occasional hand-made loaves. Nice, but nothing like Mom’s, and it just wasn’t satisfying, nor did it make me feel good. The bread I’ve made, and most of the bread I buy, is more-or-less additive-free: just flour, yeast, water, salt, maybe a smidgen of oil, and then whatever seeds or other grains give it extra body, flavour and oomph, but the results aren’t what I remember.

The paleo diet, mentioned above, shuns bread entirely, and my fairly “new age” doctor writes on the health action plan he gives to his patients, “Grains are not a natural human food. They are bird food.” I don’t agree. Human beings have been eating bread for millenniums. Archaeological records show more than 10,000 years ago, people made flat breads by gathering grains that they pounded into flour and mixed with water to bake on hot rocks or in the ashes of the fire. It may be the discovery of baked grains like this that prompted the first agricultural settlements. The ancient Egyptians gave us leavened bread.  “Give us this day our daily bread,” we ask in the Lord’s prayer, from the New Testament. And more recently, but still a thousand years ago, Persian poet Omar Khayyám wrote

Here with a loaf of bread beneath the bough
A flask of wine, a book of verse and thou
Beside me singing in the wilderness
And wilderness is Paradise enow.

Bread is the staff of life. “Bread and butter” is a euphemism for a job. When French queen Marie Antoinette was informed the populace could not afford to buy bread, she purportedly replied, “Let them eat cake,” and thereby prompted a revolution. Bread is at the heart of our history, our language, our poetry, and our health. It is an essential subsistence substance.

So what is going on with our bread? Is there something wrong with modern flour? How are they growing it? Are GMO ingredients sneaking in? Do herbicides, fungicides, and insecticides play a role? (No food maker wants weevils in his flour.) What about the canola oil that shows up on many commercial ingredient lists? Is our yeast different from yeast a decade ago? Why doesn’t modern bread go mouldy? What sort of unknown additives are being dumped into this existential food? (Alex Renton, in a delightful and informative article on the history of “The British Loaf” asks "Is your bread making you ill?" and points an accusatory finger at enzymes that don’t have to be declared as ingredients in commercial bread.)

Whatever is going on, I want the old bread back. I want to again be able to sit down and swoon over warm, fresh baked bread with a generous smear of butter and ruby jewel raspberry jam—without feeling guilty, sick, or stuffy-nosed. I want real bread that behaves "naturally" and goes stale in a couple of days and mouldy if left much longer than that. I sort of feel like one of Marie Antoinette’s subjects, but I don’t want cake. I just want some good, honest, healthy, wholesome bread. Like Mama used to make. Popular though green juice is at the moment (and I have a juicer, and a kale patch in the garden), it just isn’t the same.
Posted by Susan Thrasher at 18:14 No comments: