Our beliefs are spookily powerful. They run as sort of unconscious background programs (to use a computer analogy) in such an unobtrusive way that we are rarely even aware how much they influence our thoughts and responses to the events that occur in our lives. Paradoxically, we get our beliefs as a product of our interaction with our environment, our social situation, our culture (they aren’t “hard wired”)...and then we use those beliefs to create the filters that modify our experiences, affecting how we perceive, interpret, assess, and act on those life events.

Belief is rarely a conscious thought, but rather such a fundamental, heart-felt sense of what is right, correct and true, it is often difficult to imagine that others might not share our fundamental understanding of how the world works. Thus we have some people who believe it is best to save your money in case you need it later, and others that reckon if you’ve got it you should use it and enjoy it because you might not even be around later. You have some people who believe it is better to stand up and be noticed (be a tall poppy), while others admire those who choose to work behind the scenes without calling attention to themselves (don’t be a tall poppy). You have some that believe wrong-doers should be punished—‘’let ‘em rot in jail”—while others believe in the power of rehabilitation and redemption, and still others who stand back and refuse to judge another person’s rightness or wrongness, believing that is not their place. It’s funny stuff, this belief business.

Belief is a powerful theme in a couple of books I’m reading at the moment. I often read more than one book at a time, and sometimes I find myself surprised at how seemingly incongruous books echo similar or related themes, because I don’t intend or expect that when I pick them up. Such is the case at the moment. 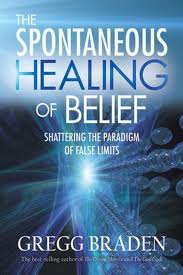 Gregg Braden’s book The Spontaneous Healing of Belief: Shattering the Paradigm of False Limits examines the nature of belief from a scientific, quantum physics level. Frequently using a computer analogy, Braden develops a serious of belief “codes” in the book. For example, Belief Code 5: “Our beliefs have the power to change the flow of events in the universe—literally to interrupt and redirect time, matter, and space, and the events that occur within them.” It’s the seemingly little choices we make in our day-to-day life, based on our beliefs, that can have implications far beyond our personal lives. We are, according to Braden, “interacting with the essence of the universe.” The old butterfly flapping its wings in South American affecting the tropical storm in Vietnam.  We see it happen all the time: one person says something that gets someone else thinking about something else and then they say or do something they wouldn’t have said or done if the first person hadn’t said something, and then it gets carried on. Sort of like Chinese whispers. And things change.

Or Belief Code 15: “Beliefs, and the feelings that we have about them, are the language that “speaks” to the quantum stuff that makes our reality.” On a health level, for example, science still puzzles (but fully acknowledges) the power of placebo: if you think something will help you get better, it probably will. In a religious sense, it may well be the power of belief that creates miracles ranging from divine healings to stigmata to levitation. 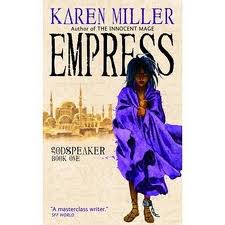 Braden’s book is easy to read and interesting, taking an almost mechanical approach to how beliefs work and how we participate in creating our own reality. For a compelling example of applied belief theory, however, I cannot more highly recommend the other book(s) I’m concurrently devouring: fantasy writer Karen Miller’s Godspeaker Trilogy. In the first book, Empress, Miller creates Mijak, a world and society so totally caught up in a culture and religion of such violence and bloodshed that even the ancient Aztecs would blanch. In Mijak, godspeakers and warriors divine the god’s will through sacrifice, torture, blood-drinking, and total emersion in a bath of blood (or a pit of scorpions), and life is very, very cheap; it is hard to imagine that we could “buy” into this world based on beliefs so incredibly different from ours, let alone accept the belief structure and thought processes of the characters, and ultimately care about those characters, but we do[i]. 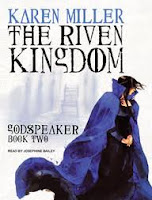 In the second book of the trilogy, The Riven Kingdom, Miller presents a new cast of characters in a  completely different society in Ethrea, an island nation that seems to come out of a 16th century fairy tale complete with princess, toymaker, old herbal wisewoman, and an evil prolate (who wants to put his nephew on the throne when the king dies and will stop at nothing to thwart our doughty princess). One could be forgiven for thinking they’d picked up the wrong book for a trilogy that started with Empress. Ethrea’s society is founded on peace, justice, sanctity of life, and separation of church and state: a belief system that couldn’t be more different from Mijak’s.

There is a connection between the two cultures, though, with the exiled warrior prince of Mijak, Zandakar, who joins the Etherean princess’s unlikely band of helpers. Zandakar’s presence in Ethrea provides the perfect vehicle for examining what happens when someone with a solidly-grounded and fundamentalist belief system comes in contact with those who have/use a profoundly different set of beliefs and values to govern their daily lives, decisions, and choices[ii].

A fantasy writer has the luxury of creating new landscapes, cultures, and social conundrums, and as readers of fantasy, we are able to take off the filtering glasses we inevitably wear in our own everyday realities and accept different paradigms and beliefs within the context of a story. It is useful to realize, however, that we DO see the world through belief glasses that filter what we perceive, how we perceive it, how we assess and judge everything around us, and that ultimately determine what we think and what actions we choose to take. It’s also useful to realize that other people wear different glasses. And although our beliefs feel “true” at any given time, and we acknowledge them as such, truth—like beauty—is generally in the eye of the beholder.  Our beliefs are just filters, and like any filters, they change and modify with time—occasionally in a dramatic fashion but more often by almost imperceptibly subtle shifts.

[i] Many years ago, I tried my hand at writing a film script, and I chose as my subject the (true) story of Boadicea, the warrior queen of the Iceni tribe, a remarkable woman who nearly drove the Romans out of Britain in AD 60. Writing the script was an interesting and enjoyable exercise, but ultimately I could not manage to make the central character a woman one could empathize with. Her world, I decided, was just too different from our own, with a set of beliefs and values that worked then, but are not acceptable now. My hat is off to Karen Miller who manages to do so with her Mijak knife-dancing warrior empress Hecat and her entourage, at least throughout most of the first book.
[ii] In the third book, Hammer of God, the two cultures collide.
Posted by Susan Thrasher at 13:46