Last night on TV3’s 60 Minutes they ran a story on antidepressants. Titled “Unhappy Pills”, the story explored the link between antidepressants, suicide, and violence, and hinted at the unhealthy relationship between pharmaceutical companies and our health regulators. Dr David Healy, well known for his “we need to be very careful because they’re dangerous” stance on antidepressants, was interviewed along with a young lad who’d lost his mother and brother to the drugs, and a mother who had lost her teenage son. You can watch the video here: http://ondemand.tv3.co.nz/60-Minutes-Unhappy-Pills/tabid/59/articleID/4863/MCat/22/Default.aspx

Sharing the dark side of the antidepressant story has long been one of my most passionate causes. Earlier this year, I published my master's thesis on antidepressant use, called "Collateral Damage", which you can find here if interested: http://researcharchive.vuw.ac.nz/handle/10063/1501 It is, of course, written in a style appropriate for a psychology thesis, which is hardly anyone’s cup of tea, but the first couple of chapters deal with the history and development of antidepressants (a fascinating story), and there are sections on antidepressant effectiveness, suicide, violence, side effects, and off-label prescribing (e.g., to children, pregnant women, the elderly), as well as a few asides about pharmaceutical marketing--before the reader gets to details of my particular research project which looked primarily at patient-perceived effectiveness, side effects, and withdrawal issues.

Probably the best, most readable, and most powerful book examining the role of psychiatric drugs and their marketing is Robert Whitaker's "Anatomy of an Epidemic" (© 2010). David Healy, who was interviewed on the 60 Minutes program, wrote of Whitaker's book, "In making a compelling case that our current psychotropic drugs are causing as much--if not more--harm than good, Robert Whitaker reviews the scientific literature thoroughly, demonstrating how much of the evidence is on his side--the case is solid..." and Nils Bruzelius of the Washington Post wrote "Every so often a book comes along that exposes a vast deceit. Robert Whitaker has written that sort of book. Scrupulously reported and written in compelling but unemotional style, this book shreds the myth woven around today's psychiatric drugs." I highly recommend the book, which is newly available in paperback from Amazon (see http://www.amazon.com/Anatomy-Epidemic-Bullets-Psychiatric-Astonishing/dp/0307452425/ref=sr_1_1?ie=UTF8&qid=1323114461&sr=8-1 for the book and reviews of it). 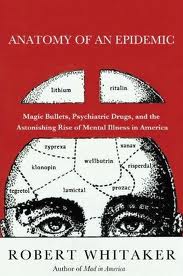 These drugs are dangerous, and what's most frightening, doctors--in their ignorance--hand them out like sweets. We trust our doctors to make important health decisions for us. However, pharmaceutical companies--ranked the 3rd most profitable business sector in 2009 by Forbes--are far more concerned about returns to shareholders than they are about the health and well-being of the end users of their products, and they market their drugs primarily to doctors, who ultimately are just middlemen passing them on to users. (In the sex industry we call these middlemen “pimps”; in the illegal substance world, “dealers”.) Pharmaceutical regulators, as 60 Minutes showed, are all-too-often shareholders in the pharmaceutical companies they regulate. It is an insidious, nasty, and frightening loop.

If you are one of the 10% of Kiwis (or Americans) currently taking antidepressants, it is essential that you don’t toss them out and quit taking them “cold turkey”. The side effects of withdrawal—including the potential suicidal/homocidal ideation—are often emergent upon withdrawal, along with a whole collection of other nasties like nausea, dizziness, and brain zaps. The drugs must be weaned off slowly, ideally with the help of a supporting physician. I also recommend the excellent forum www.paxilprogress.org  Paxil is the US trade name for paroxetine, one of the most common SSRI antidepressants.

(P.S. On a completely irrelevant--to this topic--note, I can't figure out why the last three paragraphs are appearing in a white box! I've even tried deleting and starting over with a repaste from Word and it's still happening. If you have a clue, let me know! :))
Posted by Susan Thrasher at 14:20