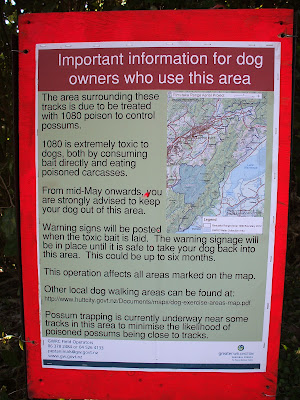 There’s a lovely little forest loop walk near my house called the Gum Loop Walk, about 40 minutes long if you ramble, that is enormously popular with dog walkers, runners, families, young kids learning to ride their bikes and the like. I probably walk it 3-4 times a week, and I can’t remember the last time I walked it and didn’t see others doing the same. Yesterday this sign appeared at the start of the walk.

It says that the Greater Wellington Regional Council have targetted this area “to be treated with 1080 poison to control possums” sometime mid-May, and warning dog owners to keep their pets out of the area for up to six months. If you look at the map, and read the fine print, you can see that this is to be an aerial drop, and the drop area includes not only this track and others like it, a five-minute walk from the nearby Wainui suburb of Homedale, but also over one of Wellington’s primary watershed areas! (That's the bluish coloured area on the map; the drop area is the area encircled by the blue line.) You’ve got to be kidding! 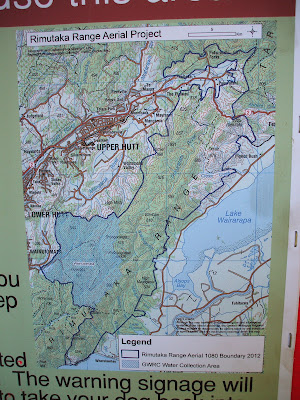 I have written several posts about 1080 before[i] but in brief: 1080 was originally developed as an insecticide. It is such a toxic poison that it is banned in all but half a dozen countries. New Zealand uses about 85% of the total world production on its forests. 1080 is toxic to all living things that depend upon oxygen for survival, although some, such as dogs[ii], are more susceptible than others. There is no antidote. In their agony—death by 1080 is neither quick nor kind—some observers suggest that animals seek water in a vain attempt to ease their anguish, dying in or near that water. Possums and rats may be primary targets, but wild deer and pigs are common by-kill. Secondary poisoning—caused when another creature eats the carcass of a poisoned  animal—is common and affects morepork, hawks, and weka, (and dogs) as well as the myriad of insects and worms that would normally hasten the decay process. Those poisoned insects and worms, in turn, may be consumed by other animals and birds—breaking the forest ecological life cycle. “Vegetarian” birds such as tui (nectar-feeders) and wood pigeon (foliage browsers) are generally unaffected.

The documentary Poisoning Paradise: Ecocide New Zealand is an excellent documentary  available--if you live in New Zealand--from your local video store or library. Below is a 6-minute you-tube compilation from the documentary (don’t click out during the first minute just because it starts like a cheesy ad for NZ), or you can go to you tube and download the whole thing for free.

The Department of Conservation defends the use of 1080, saying it is essential to reduce predation on native birds.  They claim 25 million native birds a year are killed by predators[iii]. Where do they get this astounding number? And given the possum is almost exclusively vegetarian, how does this add up to a need to use 1080 to kill possums? It doesn’t even make sense! They also make 1080 sound harmless by noting it is biodegradable (but very slowly in cold weather) and a natural form of it can be found in some toxic plants. DOC says “waterways must be closely monitored”[iv] but the Wellington City Council is planning to drop this stuff in Wellington city’s watershed. Unbelieveable! And the public hasn’t been consulted. It’s just fait accompli.

I’ll end this blog with a couple of photos I took on the Gum Loop walk this morning. 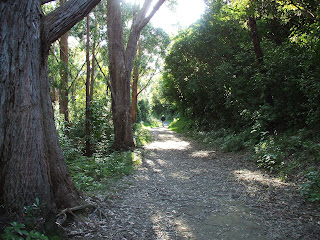 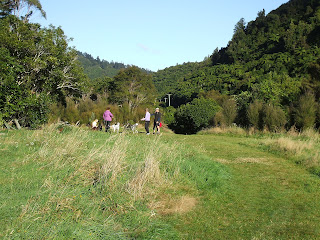 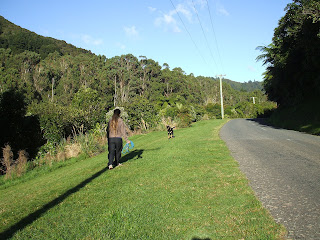 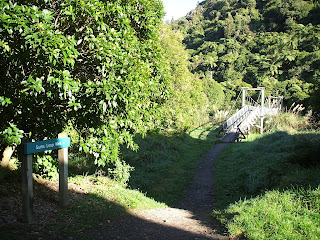 You can see why this is such a popular walk--it's pretty! The tarmac road in the second-to-last photo leads to the water treatment plant and the watershed, both in the drop zone.