"People today—it seems they are good, or sometimes evil, mostly by inertia, not by choice. They act as their surroundings prepare them to act… A hundred men, convinced by society that ‘everyone does it this way’ will go along with the most crude and despicable of acts." (From Brandon Sanderson’s The Alloy of Law)

The election campaigns in New Zealand are ramping up with the 20 September voting day in sight. Much fuss has been made about Nicky Hagar’s just-released book Dirty Politics which reveals the incumbent National government’s links to knavish right-wing bloggers, an apparent fistful of incriminating emails, accusations of dodgy leaks and hacked opposition party computers.

I haven’t read the book, and I don’t intend to, but it raises an interesting issue about the folks we have running our country. When the microphones are shoved into his face by eager reporters wanting his take on the latest revelations, Prime Minister John Key is quick to tell the press that New Zealanders are more interested in issues than scandals, and that may be true to a point. But I think issues of honesty, integrity, and being up front with the public from the country’s leaders surely rate as high as national cycleways, class sizes, and rugby referees.

Key, often referred to with a bit of a grin as “Teflon John,” or less complimentary as “Slippery John,” has a rather charming way of letting the mud and muck that often mire down those in a political arena simply slide off, but he’s finding that harder to do these days. Perhaps, like an old Teflon fry pan, he’s picking up a few too many scratches.

In the midst of this National political scandal-fest, the following post popped up on my Facebook page a day or so ago, and it not only made me chuckle, but it made the point. 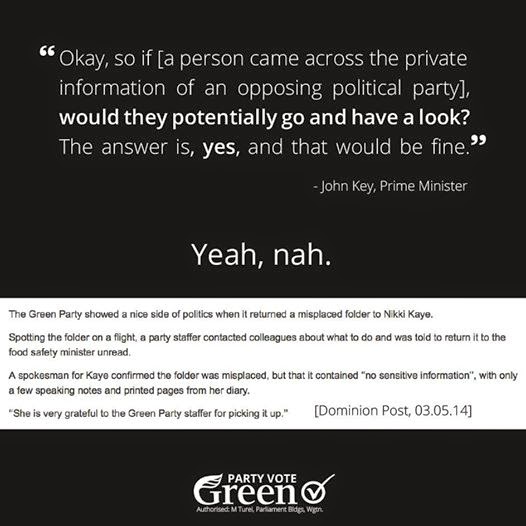 This coming election, I will be voting Green. I confess I don’t like all of their policies (and I DO wish they’d take a stand against 1080 poison, but I appreciate it is a controversial topic that may not earn them enough brownie points to make it a wise issue to pursue at election time). But I admire the way they present themselves as voices of reason, responsibility, intelligence, and integrity at a time when these qualities seem to be sadly lacking in our politicians.

In the midst of all the politics, I stumbled upon the line quoted at the top of the page—I’m currently reading Alloy of Law, a crackin’ good book, by the way, but for it to make sense, you probably should read Sanderson’s superb Mistborn trilogy first—and I was struck by both the words, and seeing the same theme echoed in this fantasy novel.

In a way, politicians reflect the ethos of the folks they hang out with, just as other social groups conform to their group social norms. Although it’s apparently easy for John Key to justify National shenanigans by saying “this is normal”, it’s nice to see the Greens (and Labour) saying, um, wait a minute, maybe that’s your normal. It’s not ours.

Maybe it’s time we let integrity, morality, ethics—goodness, if you well—become political issues we DO care about.
Posted by Susan Thrasher at 20:34