It always takes me by surprise when the universe organises some little synchronicity in my life. Often it’s connected with a book I’m reading, or something I’m thinking about.

Yesterday, a friend posted a link to a you-tube video in which Bruce Lipton and Wayne Dyer are speaking. Now I’m an old fan of Wayne Dyer, but I’ve just discovered Bruce Lipton, and am at this very moment reading his book The Biology of Belief, which was first published in 2005. 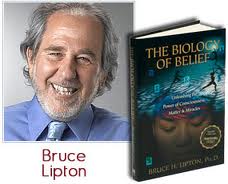 Although I read a lot of books of this ilk, I first heard about Bruce Lipton at an NLP seminar only a few weeks ago when the guest speaker, hypnotherapist John Moynihan, suggested that a good deal of our health status was dependent upon our subconscious thoughts and beliefs, and he referenced Lipton’s book. I’ve heard similar sentiments before, and was curious what a cell biologist and renowned professor of medicine might have to say about this topic.  I requested the book from my local library.

Conventional science attributes a great deal of behavioural influence to genetics, the DNA gene code embedded in the nucleus of a cell. What a cell does, conventional science says, is determined by that genetic code. Lipton observed, however, that individual cells respond to their environment in two ways: by moving towards or opening up to environmental stimuli that is nourishing, and by moving away and closing down to environmental stimuli that is harmful, and this occurs even if the nucleus itself is removed from the cell! Although the nucleus (DNA) is essential for cell reproduction, it is not necessary for the cell to be able to perceive and react to its environment. Which, after all, is what thinking is.

While studying cloned endothelial cells (cells that line the blood vessels), Lipton observed that cell membrane response to histamine (which is produced locally) is over-ridden by cell membrane response to adrenaline (which is produced by the central nervous system, which includes the brain)[i]. The nature of scientific publishing prevented elaboration of the obvious implication of the research: that the brain’s signals can over-ride localized body signals. In short:  mind over matter.

In animals and man, the central nervous system controls the organism’s growth and protection behaviours by determining the appropriate response to environmental signals. In his book, Lipton explores the effect of stress on the human HPA[ii] axis, explaining how stressful stimuli over-ride the body’s immune system (adrenaline over histamine again), making it vulnerable to disease.

In a chapter titled “Conscious Parenting”, Lipton explores the roles of the conscious and subconscious mind, comparing the subconscious mind to the programmable hard drive of a computer. He posits that early learning experiences set value and belief patterns that become so engrained  that we are consciously unaware that they are running in the background, shaping our perception and influencing our environmental responses. He does not, however, go on to say how we can learn to recognize and change unconscious patterns that no longer serve us. This is a pity because the science of NLP[iii] has now been around for several decades and it deserves wider recognition.

If this review of key points in the book seems a bit awkward and disjointed, so does the book. Overall, though, I enjoyed it. Some of his explanation of cell biology and cell reactions to chemical environments was clearer and more insightful than anything I encountered at university studying psychology, and the implications of his work provide significant challenge to several conventional scientific paradigms. However, I found the overall flow of the book disjointed, and the links connecting cell biology to placebo/nocebo effect to subconscious versus conscious thought and its impact on human health tenuous.