Villain or Victim? The NZ possum

Probably the most vilified animal in the New Zealand forest, the Australian brushtail possum was deliberately and regularly imported into New Zealand from Australia between 1837 and 1930 to establish a possum fur industry here. Populations established in many areas of New Zealand, and in 1947, all restrictions on the hunting and trapping of wild possums in New Zealand were lifted.

Today these forest-browsing cat-sized marsupials are blamed for browse damage in New Zealand forests, cited as carriers of bovine tuberculosis, and vilified as raiders of native New Zealand bird nests. They are also the primary target of regular aerial 1080 poison drops in forested areas, along with trap lines and poison bait stations. In 2009, Landcare Research speculatively estimated the New Zealand possum population at around 30 million. 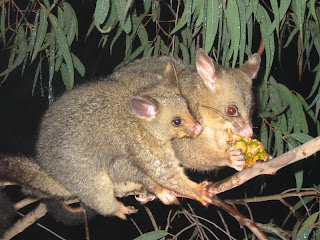 Protected in Australia, brushtail and ringtail possums are slow-breeding nocturnal herbivores (plant eaters). A single joey is born to a mother after a 17-day gestation period. After crawling into her pouch, it attaches to a teat and lives there for about five months. Later, the young joey is often found riding on its mother’s back (as in the photo above, from Wikimedia Commons). Adult independence and breeding age is reached in about a year.


Possums are solitary territorial animals commonly found in forests and woodlands, especially near suburban and farm areas where easy access to fresh fruit and vegetables proves irresistible. They are not prolific breeders (one joey per year), they are not voracious bird eaters, and although they can carry and transmit bovine TB, it seems likely that they catch it from infected cows rather than from each other.

In his book The Third Wave: Poisoning the Land[i], Martinborough vintner and conservationist W. F. Benfield suggests that the actual environmental impact of the possum in New Zealand is small.  Sharing an ecological niche as a forest browser with the New Zealand wood pigeon and the endangered kakapo (nocturnal parrot), studies[ii] analyzing the stomach contents of possums reveal a diet consisting of woody foliage (40-50%), seeds (35-40%), fruit (around 15%), and insects (less than 2%).  No evidence of bird or nest predation was found. Benfield goes so far as to suggest that sensationalist photographs of possums eating eggs or chicks are “contrived events for the camera” to encourage public acceptance of 1080 poison drops. He noted that in one research study, “it took 46 hours of starvation before a young male possum could be induced to consume bits of dead birds”. As for claims of damage to native forests, he cites Landcare scientist Graham Nugent who observed in a 1994 press conference that in general, possum browse is slight compared to natural foliage production and not of significant concern for forest conservation.

Possums can catch and spread bovine TB, which is understandably concerning for New Zealand, an agricultural country which depends heavily on the economic viability of its dairy herd. Bovine TB can also be carried by other mammals including deer, hedgehogs, rabbits, pigs, goats, rats, cats, and ferrets, animals which also often share the cattle habitat. Australia, which has possums and other wildlife, eliminated bovine TB in 1997 by rounding up and culling infected cattle. Although eliminated from much of Europe and North America, bovine TB remains a common scourge in many parts of Africa and Asia.

In an admittedly quick perusal of the net, I tried to find what percentage of the New Zealand dairy herd is infected with bovine TB. The Animal Health Board’s 2009 information (at http://www.geospatial.govt.nz/the-animal-health-board-ahb-containing-bovine-tb) simply says that their goal is to achieve the industry standard of less than 99.8% of dairy herds, stressing the importance of ongoing possum control programs to achieve that aim. On a British site, a small graph shows New Zealand pretty much sitting on 0% as of 2008.

And for me, all of this begs the question: Why, exactly, should the NZ Department of Conservation and the Animal Health Board make such an issue out of possum control and the importance of 1080 drops? I feel another post coming on...