The New Age fraternity touts the “we are all one” concept often. One would think the biologists and conservationists who work in nature would see and recognize this all the time in the natural world they study. Yet it seems to me that so many conservationists and biologists get side-tracked trying to “manage” wild spaces that they forget that even seemingly small changes in an ecological environment can have big consequences. 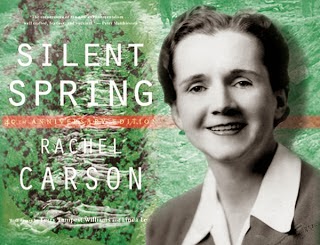 This all comes to mind as I am currently reading an old book, Rachel Carson’s Silent Spring, published a little over fifty years ago, and I’m thinking that little has changed since she wrote it. Carson was a biologist and conservationist, and her iconic book profiles numerous cases where trying to “manage” a problem in nature had unexpected and often catastrophic consequences.


For example, in trying to battle Dutch elm disease in the 1950s in the US and Canada, hundreds of  thousands of acres of elm trees were sprayed on a regular basis with the insecticide DDT (although caused by a fungus, the disease was believed spread by beetles). The resultant loss of birdlife was nothing short of spectacular. Although the birds weren’t sprayed, the insects that made up their food supply was killed off, including the worms that digested the contaminated leaf litter under the elms. Carson cites reports of dead and dying birds everywhere the spray was used, with mortality rates in the high 80% for the ubiquitous robin, and by-kill reported for some ninety other bird species. Those birds that did survive did not lay eggs, or if they did, the eggs proved sterile. Ironically, the spray offered little salvation for the elms, and hand-trimming of diseased branches proved in time the most effective remedy. Carson mused whether saving the elms, magestic though they are, is truly worth the death of so many birds.


DDT was also implicated in another example Carson documented in her book, when the spray was used to control the spruce budworm, an endemic insect that damages trees grown for timber and paper production in Canada. Downstream (quite literally) from the spray areas, insects disappeared and fish died in such prodigious numbers that the salmon runs were virtually wiped out and populations of game fish such as bluegill, bass, crappy, and suckers were decimated. Further downstream, estuary life was likewise affected. Carson’s book does not make for happy or uplifting reading.

There are a couple of more uplifting stores regarding the interconnections of the natural world to be found on the net. This is one of my favourites, about Yellowstone National Park and what happened when they reintroduced wolves into the park--a trophic cascade titled "How Wolves Change Rivers".

Another recent you-tube find is this one, from researchers at the University of British Columbia who have documented the communication and networking that occurs between forest trees. Rather than competing with each other (the usual biological assumption), these trees co-operate and help each other.

Shamans have known for thousands of years that plants communicate between themselves and can even, sometimes, communicate with humans, an observation raising many issues about what constitutes consciousness, awareness, and communication. Main-stream scientists have mostly scoffed at this idea. Indeed, a lot of scientists and other folk still argue that many animals (let alone plants) are not conscious beings in the same sense as humans, the old “they don’t feel pain like we do” mantra. So I reckon it’s nice when scientists stand up and say, “Well, actually….”


I’ll end this post with a brief reminder of the New Zealand view of conservation. (I live in New Zealand, so this is pretty pertinent to me.) Conservationists here are really focussed on “managing” wild spaces, especially in the name of eliminating those plants and animals that are not endemic to these islands. Hence, poisons like 1080 are aerial dropped over vast swaths of wild forest to kill off rats, mice, deer, wild pigs, wild goats, and stoats (with significant bird by-kill rarely acknowledged), and plants designated as “weeds” such as gorse, banana passionfruit, passionflower, morning glory, cathedral bells, Kahili ginger, and Mexican daisies are often sprayed with herbicides such as RoundUp.
Posted by Susan Thrasher at 20:52